It was around my 13th birthday when my mom gave me the gift of self-scrutiny. It was an electronic makeup mirror, a clone of her own, that lit up and magnified my face from both sides with an array of daylight themes. Did I want an evening tone? There was soft blue for that. Morning? A yellow, fresh hue. With this mirror came my very own pair of tweezers - the most important tool to commence the morning ritual of plucking away hairs and insecurities. I had watched her do it for my entire childhood, and it was calming in a way. She would be fresh from bath or shower, sometimes in a kerchief, sometimes with hair tied back, and sit down in a tiny chair in front of a mirror parked front and center at a little table with an opening for her legs and a three paneled mirror behind that. If it were a painting, it could be called a triptych. She would first embark on the arduous task of removing any deviant hairs. I remember my hopes for an equivalently flawless and hairfree nose line were shattered when she told me that if I plucked for 20 or more years, they just wouldn’t grow back. That’s a long time when you are 13. At some point she would apply a palm’s dabble of an Estee Lauder white cream - a smooth, sweet smelling cream that I watched in my lifetime go from $40 to $44 a bottle, and likely is now higher. It was, she told me, the secret to her flawless skin. I’m now more convinced it’s some Puerto Rican gene, but it’s a moot point. This cream had a shiny, rounded gold screw top that accented the rectangular, glassy white bottle. The version made years ago had a subtle cream tint to it, and the more modern one is a silkier white. I stopped using it in favor of a non-scented $3.99 bottle of face cream from Trader Joe’s at the onset of graduate school when my allergic-ness kicked in, and the fancy stuff started to give me rashes.

But back to that memory. The smell of the cream and removal of hairs from nose, brow, and (later in her life, chin) was followed by the opening of the makeup drawer. What treasures lay inside! She had brow pencils, an entire section of lipsticks, terrifying black wands that I learned to be mascara, and lip liners. She would first apply a fine line of some kind of “under eye” concealer, to hide any appearance of bags from stress or tiredness. My Mom had (and still has) amazing nails. They were long and clean, and she could jab a nail into the creamy beige stick, and then swipe it under each eye to get a perfect line. A quick rub then would dissolve the line into her skin. The eyes were then complete with a swipe of a dark liner and shadow. The process of applying lipstick was my favorite to watch, because it was like a coloring book on your face, and I could always smell the weird scent of the stuff. She would draw a line cleanly around the lip, sometimes too far over the top, and then color it in like a master painter. It was a brave commitment, because it meant that the lipstick would likely wear off toward the end of the day, leaving only the liner. Never to fear! This is why a lipstick was never far away in a purse, and a husband or child close by to ask about the appearance of the liner. She told me many times growing up that her mother never wore lipstick, and told her it (in more proper words) made her too becoming to men. When I refused to touch it, she told me that it was one of those things that skips generations. I’ll never have a daughter so I don’t have to find out, but I can imagine there is a strong propensity to not do some of the things that you observe your Mom to do. When the face and makeup were complete, the hair would fall out of the kerchief, and my Mom was flawless. Me on the other hand, well here I was in all my unibrow glory: 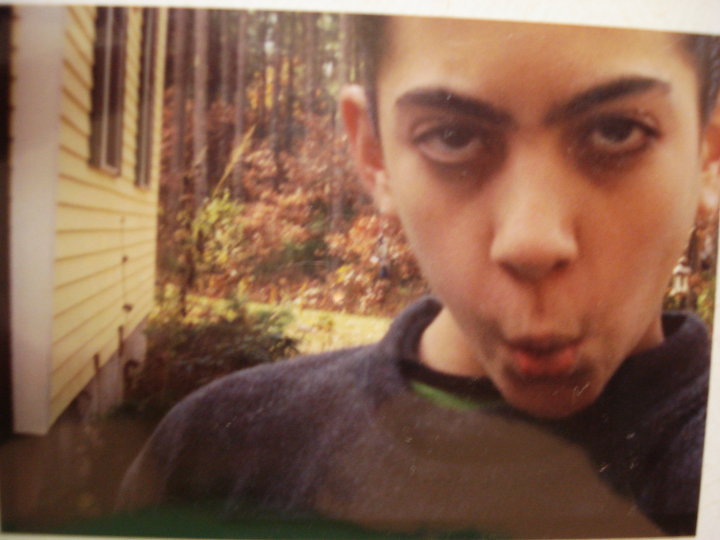 And there I was. I put my little setup on the floor of my childhood room, and plugged the mirror into the wall and directly under my bulletin board scattered with childhood photos and Hello Kitty lights. I would finish my two Eggo waffles, cut into perfect squares with just the right amount of syrup in the crevices, and go straight up the stairs to start my own ritual. Coming armed with the contribution of my Dad’s gene pool, I had much thicker and darker lashes and eyebrows, and so my uni-brow was extra Frida like. It’s funny how before adolescence, I had never really noticed it, and then it was immediately a marker of some kind of gross, ethnic hair. I painstakingly removed it, many times plucking out too many hairs. The damn caterpillar always grew back in full force, and the voice of my mom… “20 years…” repeated in my head. As for makeup, it never clicked with me. I went through an eye shadow phase in 8th grade, and went nuts with colors, dusts, and creams, and this was also when eye glitter from the store “The Icing” was the rage. The silly little screw-top bottles had this strange goo inside that would completely dry up when left even the slightest bit open. The nicer ones I had were “roll on” style, usually the “Smackers” brand. I still have some of those chapsticks and various teenager “makeup” - they are sitting in my apartment organized in a plastic bin from college one room over. It’s really the texture and scent that I kept them for - it’s an immediate warp back into the past. As for eye mascara, my first (and last) experience was with some sort of waterproof version, which I tried from my friend Kara at a sports club called Hampshire Hills in middle school. I didn’t know about makeup remover, and in sheer horror when I couldn’t get it off and resorted to using fingers to pull out my eyelashes, I never touched it again. I still won’t.

When I entered college, I didn’t bring that mirror, and was long over any kind of makeup beyond chapstick and tinted pimple cream. “Pimples” I’ve come to learn are actually pretty unlikely for many, but brought on by anxiety and some maladaptive desire to pick at imperfections. It’s a constant struggle, but I’m getting better! I brought those tweezers along, and every few years my Mom would buy me a new pair - always a really nice pair - because the ones in the drug store weren’t suitable for the task. Did I stick to my duty? Sort of, kind of. A combination of laziness and lacking setup for my ritual led to the abolishment of the daily plucking in exchange for a weekly or bi-weekly grooming. I went through phases of forgetting, and finally, not really caring, and only doing some touch up if there was a formal event like a graduation or wedding.

I just turned 30. It’s now been (almost) those 20 years (and well, I haven’t been true to my duty), but the hairs always came back. At some point in graduate school, I just stopped caring. The higher level awareness of this entire experience is the realization that this focus, this kind of ritual that derives self-worth from obtaining a particular appearance and going to extremes to achieve it, is just ridiculous. Nobody has to do this crap. It took me years to stumble on this, matter of fact I only derived this insight when I found my groove, and I found my meaning, both personally and in the things I am passionate about doing. Maybe it is some kind of “growing up” milestone, but if we had to put eggs in baskets to correspond with how we evaluate ourselves, I just don’t care to put any eggs in the “how do my eyebrows look right now?” and “should I gussy up a bit?” baskets. It’s much more fun to be silly, express your ideas and personality with intensity, and it doesn’t matter if the hairs on your face are groomed are not. When I’m tired because I’ve worked hard in a day, you are going to see that, and it’s just going to be that. As I age, you are going to know and see me, and not some mask that I hide over me to meet some idealistic plastic version of myself. Everyone else is too busy with their own insecurity and heavy self-awareness to care. This self-realization that sort of happened, but came to awareness after the fact, has been empowering on many levels. I can look at the tweezer in my bathroom, have awareness of a fast fading ritualistic memory, and then just walk away. And now I want the opposite - I am rooting for every hair on my face to grow back in all its little glory!

This post is dedicated to my Mom. As a grown up now myself, I wish, in retrospect, that she would have seen and appreciated her beauty without the makeup on - because it seems too easy to get used to a red lip, or a shadowed eye, and feel lacking without them. Mom - the times when you didn’t want to be seen outside with your Pajamas on, when you checked your lipstick in the car mirror just to be safe, or when you put on makeup in the middle of the night because you felt vulnerable, you didn’t need to do that. Radiating your inner energy and joy would have been the light that blinded people from any imperfection in your skin that was possible to see. I know that I will be loved, and I will be the same, irrespective of these things. It is not the look of a face that gives inner beauty, and so to close this post, I do not wish to validate the societal standard of evaluating women based on looks by saying something about looks. Mom - with and without your makeup, with and without your insecurities, you are beautiful. As your hair gets white, and your face more aged, I hope you can really feel that. I know that I do.