Back in 2016, there was discussion and excitement for data containers. Two recent developments have told me that now is the time to address this once more:

I was also invited to speak at dataverse and thought it would be a great opportunity to get people thinking again about data containers. I had less than a week to throw something together, but with a little bit of thinking and testing, this last week and weekend I have a skeleton, duct-taped together, preliminary cool idea to get us started! You can continue reading below, or jump to read the container database site for detailed examples.

What are the needs of a data container?

Before I could build a data container, I wanted to decide what would be important for it to have, or generally be. I decided to take a really simple perspective. Although I could think about runtime optimization, for my starting use case I wanted to be asap - as simple as possible! If we think of a “normal” container as providing a base operating system to support libraries, small data files, and ultimately running scientific software, 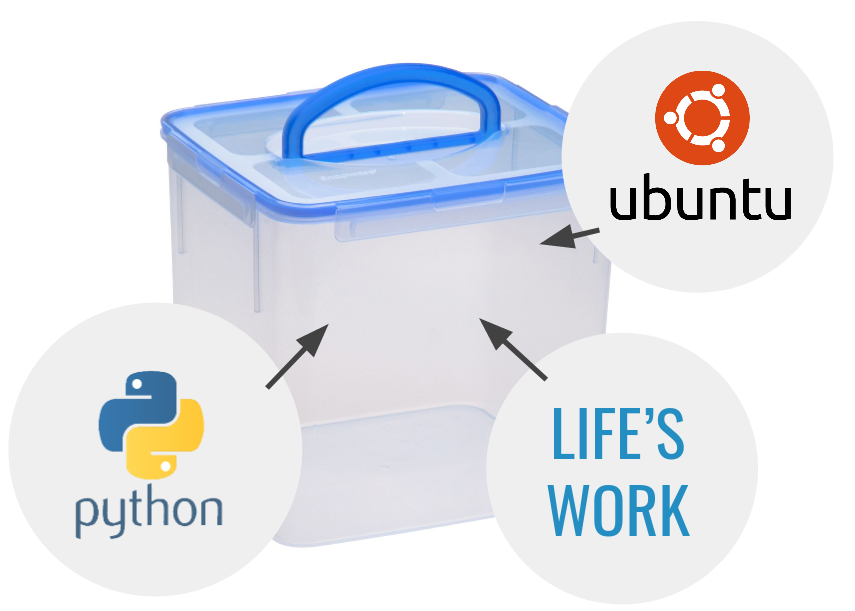 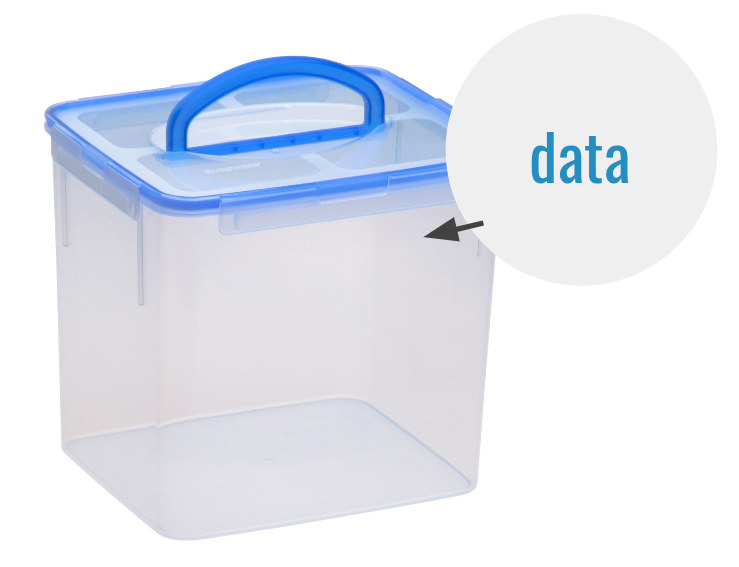 That’s right, remove the operating system and all the other cruft, and just provide the data! With this basic idea, I started by creating a data-container repository to play around with some ideas. I knew that I wanted:

If we need to interact with the data still, although we won’t have an operating system, we’ll need some kind of binary in there.

How do we develop something new?

I tend to develop things with baby steps, starting with the most simple example and slowly increasing in complexity. If you look at the data-container repository, you’ll likely be able to follow my thinking.

I started by building a hello world binary on the host (in Golang) and then adding it to a scratch container as an entrypoint. These basic commands I’ll show once - they are generally the same for the following tests that I did. This is how we compile a GoLang script on my host.

Here is how we add it to a container, and specify it to be the entrypoint.

And then here is how we build and run the container. It prints a hello world message. Awesome!

Once that was working, I took it a step further and used an in-memory database to add some key value pair, and then print it to the terminal. After this worked it was smooth sailing, because I’d just need to create an entrypoint binary that would generate this database for some custom dataset, and then build it into a container. I wanted to create a library optimized for generating the entrypoint.

How do we generate it?

Great! At this point I had a simple approach that I wanted to take: to create a executable with an in-memory database to query a dataset. The binary, along with the data, would be added to an “empty” (scratch) container. I started a library cdb (and documentation here) that would be exclusively for this task. Since Python is the bread and butter language for much of scientific programming (and would be easier for a scientist to use) I decided to implement this metadata-extraction, entrypoint-generation tool using it. Let’s walk through the generation steps.

Adding data to a scratch base is fairly trivial - it’s the entrypoint that will provide the power to interact with the data. Given that we have a tool (cdb) that takes a database folder (a set of folders and files) and generates a script to compile:

We can create a multi-stage build that will handle all steps from metadata generation, to golang compile, to generation of the final data container. If you remember from above, we had originally compiled our testing Go binaries on our host. We don’t need to do that, or even to install the cdb tool, because it can be done with a multi-stage build. We will use the follow stages:

In stage 1, both the function for extraction and the template for the binary can be customized. The default will generate an entrypoint that creates the in-memory database, creates indices on metadata values, and then allows the user to search, order by, or otherwise list contents. The default function produces metadata with a file size and hash.

You can imagine writing a custom function to use any kind of filesystem organization (e.g., BIDS via pybids) or other standard (e.g., schema.org) to handle the metadata part. I will hopefully be able to make some time to work on these examples. We’d basically just provide our custom function to the cdb executable, or even interact from within Python. Before I get lost in details, let’s refocus on our simple example, and take a look at this multi-stage build. Someone has likely done this before, it’s just really simple!

Let’s break the dockerfile down into it’s components. This first section will install the cdb software, add the data, and generate a GoLang script to compile, which will generate an in-memory database.

Next we want to build that file, entrypoint.go, and also carry the data forward:

Finally, we want to add just the executable and data to a scratch container (meaning it doesn’t have an operating system)

And that’s it! Take a look at the entire Dockerfile if you are interested, or a more verbose tutorial.

We have our Dockerfile that will handle all the work for us, let’s build the data container!

We then can interact with it in the following ways (remember this can be customized if you use a different template). You can watch me interact in the asciinema here:

If we just run the container, we get a listing of all metadata alongside the key.

We can also just list data files with -ls

Or we can list ordered by one of the metadata items:

Or search for a specific metric based on value.

Or we can get a particular file metadata by it’s name:

or a partial match:

The start command is intended to keep the container running, if we are using it with an orchestrator.

It’s more likely that we want to interact with files in the container via some analysis, or more generally, another container. Let’s put together a quick docker-compose.yml to do exactly that.

Notice that the command for the data-container to start is -start, which is important to keep it running. After building our data-container, we can then bring these containers up:

We can then shell inside and see our data!

The metadata is still available for query by interacting with the data-container entrypoint:

Depending on your use case, you could easily make this available inside the other container.

I want you to get excited about data containers. I want you to think about how such a container could be optimized for some organization of data that you care about. I also want you to possibly get angry, and exclaim, “Dinosaur, you did this all wrong!” and then promptly go and start working on your own thing. The start that I’ve documented here and put together this weekend is incredibly simple - we build a small data container to query and show metadata for two files, and then bind that data to another orchestration setup. Can you imagine a data container optimized for exposing and running workflows? Or one that is intended for being stored in a data registry? Or how about something that smells more like a “results” container that you share, and have others run the container (possibly with their own private data bound to the host) and then write a result file into an organized namespace? I can imagine all of these things!

I believe the idea is powerful because we are able to keep data and interact with it without needing an operating system. Yes, you can have your data and eat it too!

Combined with other metadata or data organizational standards, this could be a really cool approach to develop data containers optimized to interact with a particular file structure or workflow. How will that work in particular? It’s really up to you! The cdb software can take custom functions for generation of metadata and templates for generating the GoLang script to compile, so the possibilities are very open.

What are next steps

I’d like to create examples for some real world datasets. Right now, the library extracts metadata on the level of the file, and I also want to allow for extraction on the level of the dataset. And I want you to be a part of this! Please contribute to the effort or view the container database site for detailed examples! I’ll be slowly adding examples as I create them.