I might possibly be disowned for this, but I’ve wanted to give a shot at making a small bot that would generate surprising, random text. The willing participant was one of my family members that has a lot of interesting political and art-related commentary on social media. I started with the Trump bot, which is uses a word level RNN (recurrent neural network) trained on a large corpus (either Trump speeches or my social media posts). You can read more about the original project here. I wanted to:

This has led to the natacha-bot, which I’ll review steps for in the rest of this post. 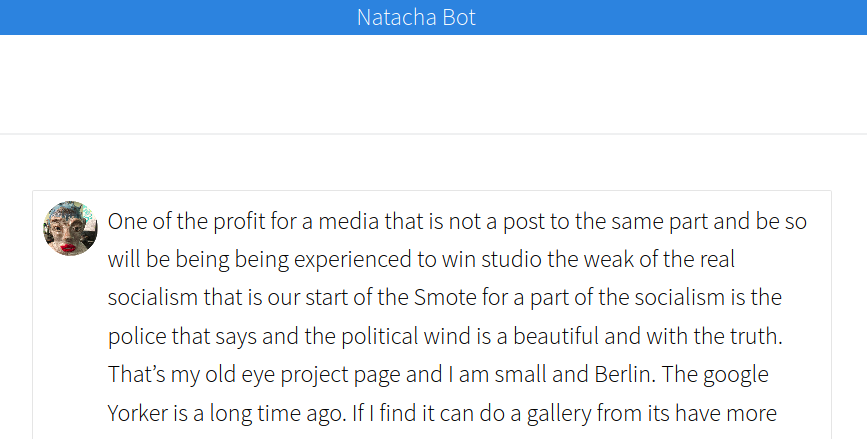 I recommend reading the background section of this post to understand the training. In a nutshell, we are using Long Short Term Memory (LSTM) recurrent neural networks to generate the text. LSTMs can take a short input snippet and then predict the next item in the sequence, and if you keep doing this, you can get a sentence to a few paragraphs. The author of Trump Bot trained two of these models, one on the level of characters (e.g., predict the next character) and one on the level of words (predict the next word). The author was clever to combine the two to produce (not scientifically proven, but subjectively stated to be) an overall better outcome. In his own words:

And largely, a lot of this combinatory logic is represented in the sample.py script that generates text. I didn’t do justice to test out different ways of doing it because it was a weekend project, but I invite you, dear reader, to run with it! Now that we have a high level understanding of the training and models, let’s talk about what interests me most - the steps to make it happen.

The repository was documented to some extent, but it wasn’t entire clear how to properly create the input data and then perform the training. Like any good lemming, I used the structure of the data in “data/trump” as an example for my own data. Here is what it looks like for trump:

And I mimicked this structure by way of having a data export that I cleaned and parsed into an input.txt file.

My raw data is represented in the “export” folder (not shared publicly) and the cleaned data is exported to input.txt. The script “generate_input.py” handles parsing the files in export, and cleaning them up. Note that even after I cleaned them up programmatically, I still went through to remove family last names, locations, and anything that I missed. My text editor uses regular expressions, so it wasn’t too much extra work, however it’s not represented in the python script. If you clean your own data, your process will undoubtably be different from mine.

I noticed that the files “train_word.sh” “train_char.sh” and “train_script.sh” in the root of the repository all used the lua scripts to perform training, usually on one of the Trump input files. If you look at the filesystem listing above, you’ll see that I reproduced these files in the data/natacha folder, and then copied them to where they would be used for the Docker build. That looks like this:

Yes, the top sections could be cleaned up so we aren’t creating so many layers to copy single files. Also notice that:

The above container I would build and run as follows:

If you give this a shot, I recommend using a container recipe, but running each of the build.sh commands separately to first build different layers. The reason is because if you want to change something, or if there is an error, you can start with the container layer that failed. For example, if you list images and add “-a” you’ll see the layer ids that are from failed builds:

You can then run an interactive session into that container where you left off, and you don’t need to run potentially hours or a day of training again.

You can then work interactively in the image, and when you want to save it, find it again based on the image identifier:

And then (on your host) you can commit the running container.

This saved me a lot of time, because I had an error with a copy of the models into the cv folder, and instead of needing to re-run everything, I just shelled into the layer that had the finished models, copied the correct files, and commit the container.

When I had finished the above container (note we are using the “train” tag) I completely forgot about the sample base, and built a GitHub workflow to run the container, generate wisdom, and open a pull request to add it to render at a static interface on GitHub pages (in the docs folder. What happened on on early run? Well, it failed of course! I didn’t save this run, but essentially the massive container (15GB!) ate up all the space available on the filesystem, and the action failed. This is how I quickly realized that the “sample” tag was intentionally created to move the final model into, and provide a much smaller base to deploy. Here you can see both tags on Docker Hub: 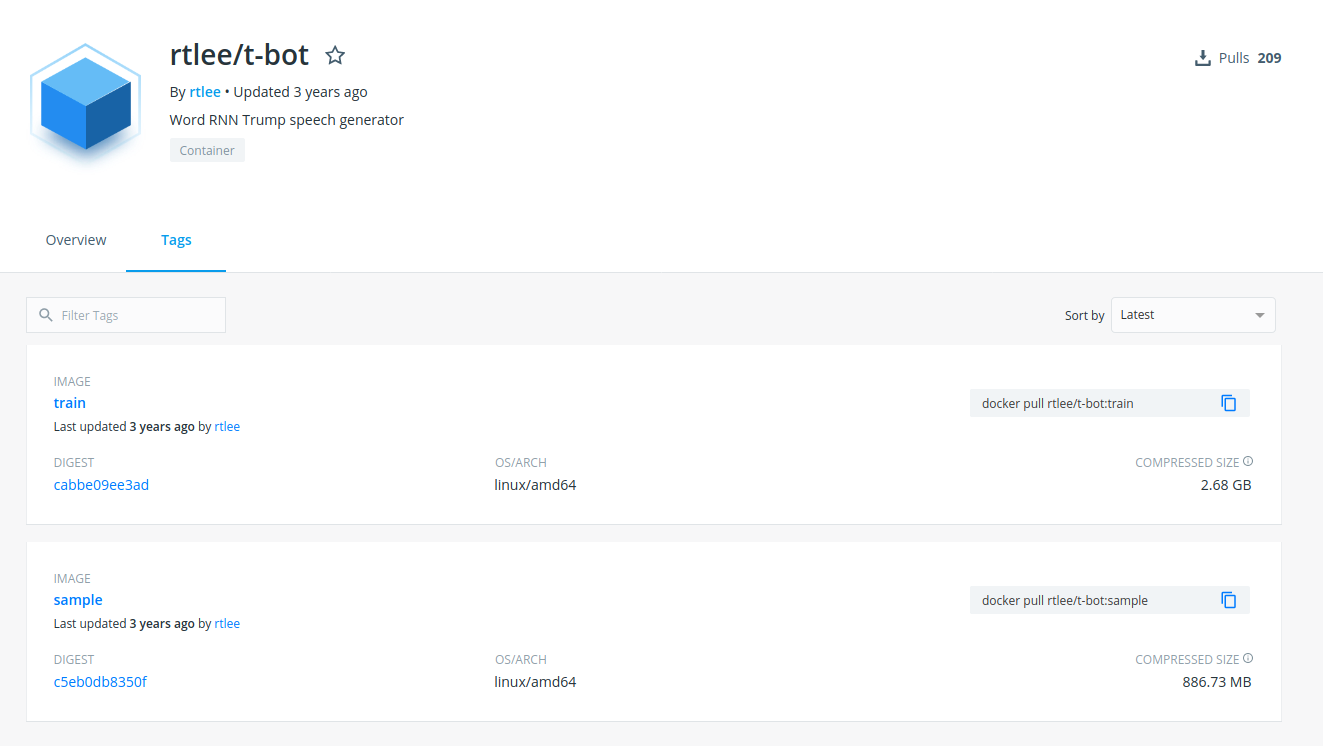 So I added a Dockerfile.bot to perform a multistage build and copy only those needed files from the previously built container:

And then I built as follows. Yes, I intentionally named the container something else in case it was messed up - I didn’t want to overwrite the image identifier “vanessa/natacha-bot:latest”

And then once I was happy, I could rename it.

Because the final image is a much more reasonable size!

The difference in size is likely because the “train” tag contains the pre-trained GloVe word embeddings that are needed for training, along with all the library dependencies for it. I didn’t poke around the container further to investigate more, but this is what I’d suspect.

And of course the GitHub Action is running, nightly, to generate and open a pull request to add a new snippet of wisdom!

And you can see the tiny interacted here, which I designed to look like a simple feed of posts. If you search for a term (upper right search icon), you can also see where and how it shows up:

And once I was done and cleaned up, wow, that was a lot of space!

I can’t say that it’s very good, or that I’ll run it forever, but I had a lot of fun figuring out how to reproduce the Trump Bot, and weirdly capture the essence of this particular family member for all of time in an algorithm! The input data was a lot less comprehensive than the Trump speeches, so I think there is great room for improvement, but I’m happy with this as a first shot. Love you, natacha bot! <3