This morning we had an awesome question on the Singularity list about “motd.” The idea was simple, and given the potential for fun and helping users to understand containers, I was excited.

If you’ve ever logged into a linux cluster, or played a computer game like Half Life or World of Warcraft, you might be greeted a “message of the day” (motd). There is a bit of history behind it. In short, we print a message to the terminal for the user to see when he or she first logs into a shell.

How can we use motd with containers?

In the context of a container, we might want to give the user a friendly message if they shell inside. The simplest use case is to greet the user. A more useful use case is to provide some help for how to interact with the container, or where to find documentation. In this case, the message of the day becomes a powerful tool for interacting with the user.

How do we add motd to Singularity containers?

If we are creating a Singularity container, we can’t just echo a message in the runscript, because this gets executed on a shell or a run. We need to edit the /.singularity.d/actions/shell script that is executed only on a shell.

If you want to jump right into code, see the singularityhub/motd repository. Here I have created some getting started examples for you to learn from. For the remainder of this post, I’ll show you what they look like! You can also just watch the asciicast below:

The simplest greeting can echo something to the terminal:

This is one of my favorite because it’s relatively simple to install (and then call) figlet.

To generate the above, I take advantage of the $USER environment variable, and add a fwoop. See the asciiart folder for the full recipe.

I like the command “fortune” because you never know what kind of wisdom is going to pop up.

Interesting! We can also throw in some lolcat and cowsay magic to make, of course, lolcow.

See the fortune folder for the recipes used to generate the above.

But there is one problem here, we are still relying on the user to type that command in the first place! This is a great use case for message of the day

It would be appropriate to have paths or other usage that a user shelling into the container might need. This is your opportunity to talk to the user of your container - use it.

And for the grand finale (and this example is a bit excessive, but I wanted to have it anyway) we can also show the user a graphic. We use gotermimg to greet the user with a colored image. 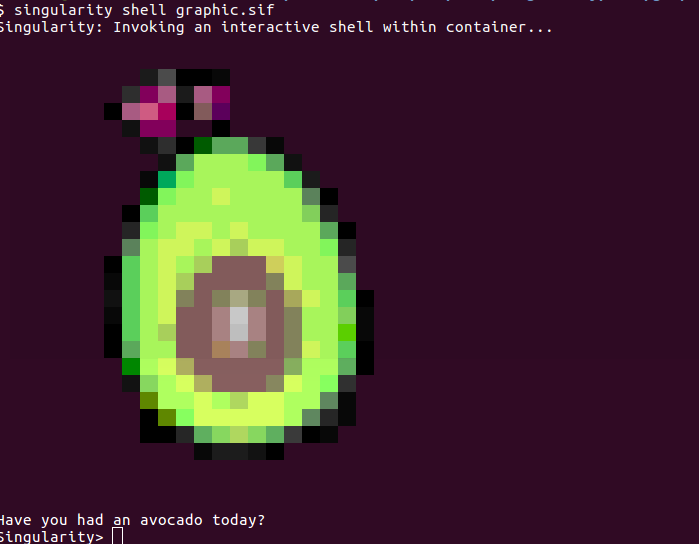 Clearly, many of these examples are for fun, and others are better for communicating information. I’m of the firm belief that we should aspire for both. Check out the repository for all the recipes, and please post an issue or open a pull request if you have a question or want to contribute.

« HelpMe Discourse You're My Only Hope... Jekyll, this is the Last Comma! »