I recently wrote a massive paper. It might be some rare disease that I have, but I’m able to produce texty content at a fairly rapid pace that covers many ideas. In most cases this is a good thing, because it provides a structure to start adding meat, and pruning away some, but in some cases, people will look and say “Ohno this is just too long!” This happened to me recently, as I had 27 pages of thinking (not including references) and more of a desire to share it in a digestable way than to figure out how and what to cut. Note that we will eventually have some much shorter version, but to start I am more excited to just share all the ideas and get people working together.

So what to do? I decided I wanted to make a website. To cut to the chase, I ultimately wanted to generate a website and LaTeX paper (pdf) from the same content, and I wanted it to be automated and easy. So this small post will walk through how I started with a LaTex thing and wound up with a fully rendered and organized site. Now I don’t have a totally automated way to generate everything because your site will be organized differently from mine, but I’ll walk through the steps that you too can take!

Step 0: Have a Jekyll Template

You’ll want to start with a Jekyll template, and follow the basic steps for jekyll-scholar so that you have a collection for paper details, “paper-details” and an entire section in your “_config.yaml” that describes your citation files. A good example of me doing this is in an old project, notes jekyll. If you have any questions, please don’t hesitate to open an issue.

Step one is of course obvious - you should first write your paper! However, the trick to making this easy to convert to modular parts of a website will be how you design the LaTeX. Let’s say you normally have some “main.tex.” Instead of this one file, you actually want to “input” sections so it’s modular. So, for example, a snippet of my main.tex might look like this:

In the above, you’ll see that instead of just writing sections in the introduction and the abstract, they are each contained in their own files, “abstract.tex,” “introduction.tex,” “what-is-rseops.tex,” and “what-is-devops.tex.” These files will be plopped in a “src” folder of our repository, and will be easy to render into a standard pdf, but also will be easy to run a few steps to generate html with citations for the site. So the first step is download those files (get them out of Overleaf or whatever!) and put them in a “src” folder alongside your jekyll site. Mine looks like this:

Do you notice the bib (bibliography) file? Notably, that is going to need to go in this folder and also be present in “_bibliography” for the jekyll plugin. So what I did is to create a link:

I decided that, for some number of my *.tex files, I would want to render them into pages. What would be an easy way to do that? With Jekyll includes of course! I tested both rendering markdown and html, and html includes work much better. To prepare the structure of my site, I created a “_includes/paper” folder

and then wrote a simple text file list of the names of those I wanted to include, includes.txt, an example shown below:

These are just prefixes for what will eventually go from LaTeX (tex) to html. E.g., “abstract” will render an include for “abstract.tex.”

If you are like me, you’ll want a container that can easily run pandoc to convert from LaTex to markdown (or html, actually). Here is the container I threw together:

You’ll notice the commands to build and run are on the top lines after the FROM. This is something I usually do because Vanessa of the future never remembers what is going on :)

The build and run commands are shown above, but I also created a Makefile to “make” my life easy, lol.

This meant that “make build” would build my container, “make” would render LaTeX into the includes, and then “make run” would run my server to preview. Easy peezy! But I haven’t shown you what’s in entrypoint.sh, which is arguably the logic of the operation! Let’s do that.

Ok, this is a fairly simple bash script. We are going to, from the “src” directory, loop through each entry in the includes.txt file, run pandoc to convert from LaTex to html, and output in the _includes/paper folder, and then run a custom Python script that is going to finish some extra parsing of our entry. At the end we will also render all the files into a single PDF that we can also serve from the site.

I chose Python because it was quick, but you can obviously use another language. For this final step, our include files are almost perfect, but we have to replace the (sort of useless) citation span elements with something that jekyll-scholar can understand. This means adding the bibliography to the bottom, which looks like this:

And then replacing the useless span elements that have ids of citations with something that looks like:

Where “github” might be the name of a reference in our bibliography file.

Once you have all that, you can build the container, generate the includes, and then start working on your site! Basically, if you generate “_includes/paper/containers.html” you can insert this (which includes pretty linked references) anywhere in your markdown and it will magically just work. E.g.,

There are a few more details like customizing a “_layout/bibitem-template.html,” “_layouts/details.html” and “_bibliography/my-ieee.cls” to get the references looking to your preference, and you can see an example in another of my old notes sites, here for that. The resulting site will render pages (styling is up to you!) that have content from the paper and references, directly in the site:

And then the exact same content still renders into a beautiful PDF (this is only partially shown, as I am not done the site or work yet). 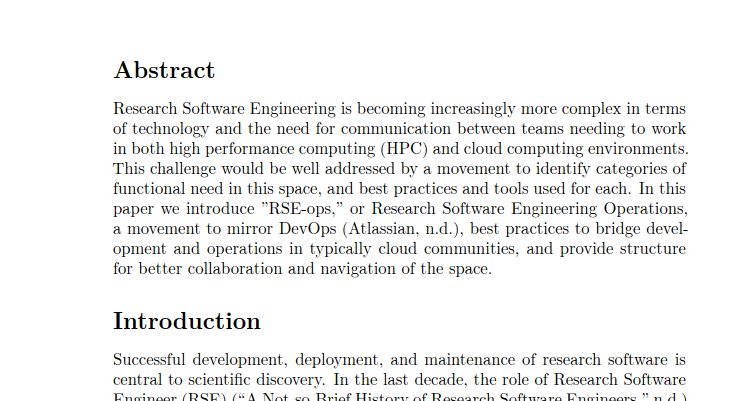 I’ll note that another step I took that was custom for my site (and you might not want or need) was to have some content in “_data/” (yaml files in my case, and you can read more about it here that also would make it easy to loop over these various sections.

All of this would be totally awful if we didn’t automate it. We want to be able to have any pull request be checked that everything runs and builds, and then a merge to main deploys to GitHub pages. Since we are using a custom plugin, this means that we will need to build the site on our own. And then it’s easiest to push to the gh-pages branch and deploy from there. So here is the workflow I came up with for that:

Notice that we are building the same container to generate any updated content, building with a jekyll container, and force pushing to the gh-pages branch on merge/push to main. So this means all you’d need to do is add the workflow, and make sure to turn on your gh-pages branch to be linked to GitHub pages!

In summary, with this setup you can:

I thought this was pretty cool, and I’m looking forward to seeing what folks can come up with. If you make something cool, please share! ❤️