I’ve recently been thinking about how we can use GitHub actions (possibly combined with other continuous integration services) to perform more complex workflows. As a quick example, let’s say that we have some central GitHub repository that hosts a static registry. It could be any kind of central registry, but for this example let’s say that it is a collection of container manifests. For those not familiar with containers, this basically means a shared metadata bucket for a bunch of objects that are maintained and built elsewhere (in other GitHub repositories). I could have some awful workflow of requiring a manual update, but does anyone really want to do that? Instead, would it be possible to have the central registry updated whenever a container repository is updated? Let’s imagine a workflow that looks like this:

The way that the last step might work is an indirect route. What I decided to do was have the metadata added to a branch of the central registry, and then create a GitHub action that would automatically create a pull request for any update to a branch that isn’t master. This probably sounds complicated, but it can be summarized as:

open a pull request when I push to a branch

The idea is actually very simple, and I put together a GitHub Action to do this, discussed next.

I’ve put together the <a href=https://github.com/vsoch/pull-request-action” target=”_blank”>pull-request-action</a> GitHub action that serves one purpose - when a branch (that you have specified) is pushed to or updated, it will open a pull request for it. That’s it! Here is what to add to your .github/main.workflow file: 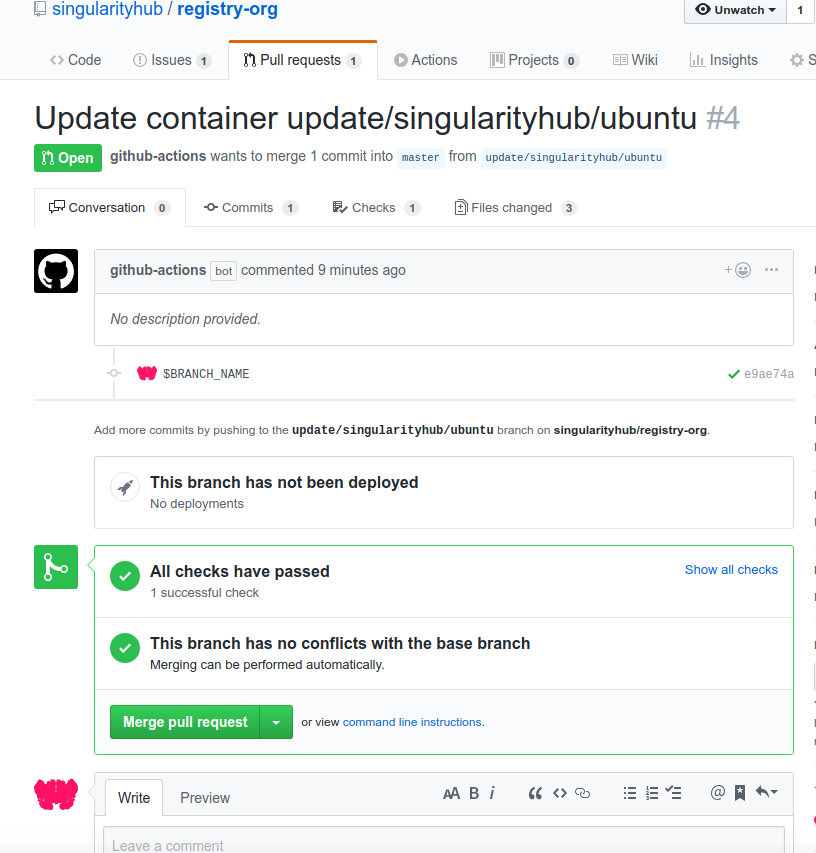 This is a cool GitHub action because it’s very developer friendly - the ways that you can use a simple trigger to create pull requests from a push to a branch is really only limited by your own creativity. It’s also great if you like having robot friends. I strangely still get joy whenever my robot updates his pull request when a container’s tests pass :)

I’ll be writing more about the Organizational static registry soon, and in the meantime, please share ideas for how this could be useful for you!