Jupyter with Tensorflow (GPU) on Sherlock

This is a followup to our original post that described how to get access to a jupyter notebook on Sherlock with port forwarding! Today we will extend the example to a new set of sbatch scripts that will start up a jupyter notebook with tensorflow. Want a GPU? We can do that too. If you want to container-based verison of this tutorial (yes, you can deploy jupyter from a container too!) then see this post. Let’s get started!

What are we doing today?

Today we are going to do the following:

For more background, see the original post. For these instructions, you should be careful about opening and closing your terminal sessions. If you find a command hanging or failing, you might need to re-authenticate the session with your password, or you might be entering the wrong password.

First, clone the repository, and remember the location. You will generate a parameters flie params.sh that you can go back to and use again.

As a reminder from the previous post, here are the files that we have to work with.

You will need to generate a file of parameters to source before using the tool. Importantly, if you want to use tensorflow with a gpu, you should select the partition to be “gpu” when it asks you.

Notice that I’ve changed the default browser (Safari on a Mac) to firefox on Ubuntu. Also note that I entered “gpu” for my partition. The resulting file is a simple text file:

Follow the instructions here to set up your Sherlock credentials. You can see what you have by looking at your ~/.ssh/config:

and when you run it, the configuration is printed to the screen:

or just do the entire thing programatically:

For local jupyter usage, set up your jupyter notebook password, for either version for Python 2 and/or 3. I wound up loading both modules and setting the same password, because I knew I’d forget.

Also make sure you have google and protobuf installed. The Python2 scripts loads protobuf as a module, but I did this anyway just in case.

Now we are back on our local machine. Here are the general commands to start and stop sessions. In the tutorial below, we will walk through using Jupyter notebook.

The above command will submit the job, forward the port, and show you the log that has your token password to enter into the url. The command to run jupyter notebook with tensorflow (using the modules provided on Sherlock) looks like this:

When you open your browser to the address, you will see a prompt for the password that you created previously. And when you are ready to be done, or you’ve left and want to come back later:

Once you have jupyter running, you want to make sure you select the python kernel corresponding to the one for your job! For our tutorial, we loaded python 2, so we would want to create a Python 2 notebook. Once in the notebook, here is a command that will let you check the devices available: 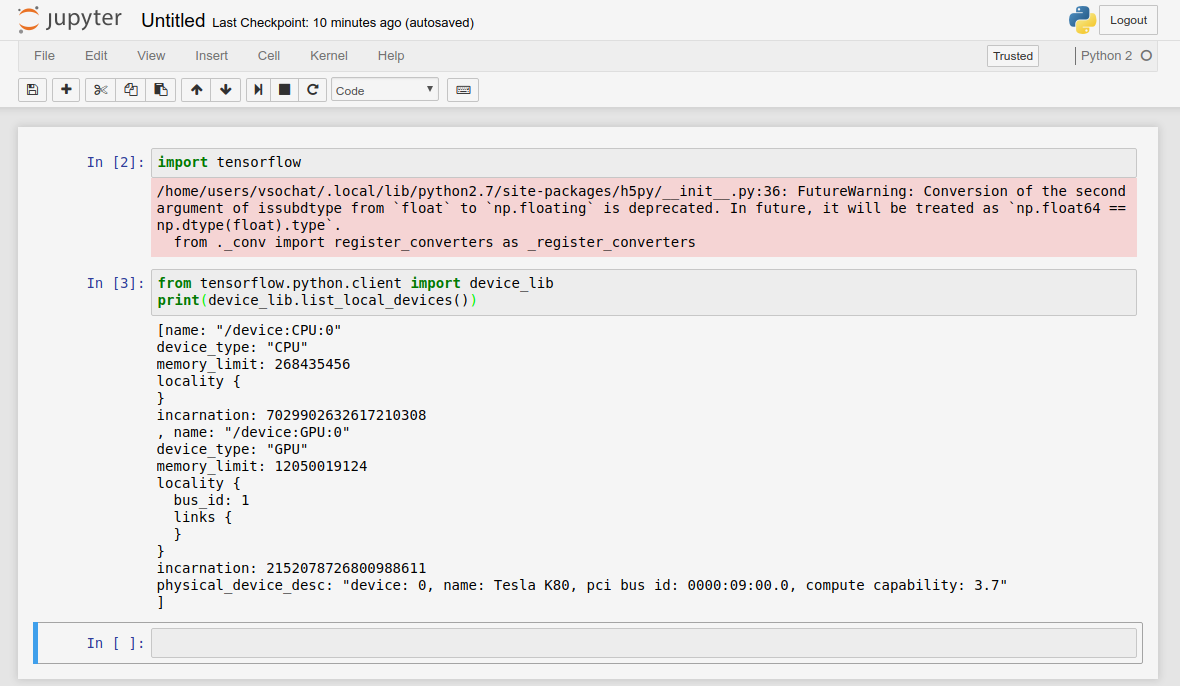 Tensorflow is really buggy, and this solution is a bit hacky, but when you get it up and running, it really is a great workflow! That said, I want to help you to resolve issues that you might run into, so I’ve written up some common pitfalls that I hit during development. If you still need help, please reach out to our group!

There is a missing module!

This actually happened for me - I got an error message that there wasn’t a module called google protobuf. This is a bug with the installation of tensorflow on sherlock, because it should be loaded if it’s required. No fear! You can fix it yourself, and even from your terminal. First, do this:

And then restart the kernal from the interface to have changes take effect (you will get some glorious error messages if you don’t).

This usually means you are trying to uninstall or install to somewhere on the system where you don’t have permission. The best thing to do to get around this is to, in an interactive shell outside of the notebook, unset your python path, and use a version of pip that is under your control (and after added to your PYTHONPATH) to install the needed module. E.g.:

and then in your .bashrc make sure this path is hit first (note you may need to adjust the location and version of python, this was for Anaconda3 installed in the default location)!

I ran into this issue with my password, and it seemed to be because I had set the password with one version of jupyter, and then was using the second. To resolve this, I shut down the server (and killed the job), and then deleted the $HOME/.jupyter folder and ran jupyter notebook password again, both for Python 2 and Python 3, and set the same password for both. I then started a new terminal and session on my local machine, and the changes were picked up.

The terminal is hanging!

To make this automated, we issue commands from the start.sh script to capture output from sherlock, using ssh sherlock to send the command. If it’s the case that your login session has expired (or you got the wrong password), then you might have a password prompt (that you can’t see) that looks like the terminal is hanging. If this seems to be the case, try opening a new terminal window, and authenticating with sherlock again (ssh sherlock pwd should trigger the login authentication flow.)

If you have a hanging process (if you killed a session and now can’t recreate it) you might get an error message about not being able to set up the port forwarding! What you want to do is use ps to list processes with ssh, find the process id, and kill it. Here is an example.

It just exited! At this point, it’s easiest to run end.sh and then start.sh again.

My notebook doesn’t have GPU

We have a simple method that checks for the --partition to be gpu, and if this is the case, it appends --gres gpu:1. If you want to customize this further, just do so by changing the entire PARTITION environment variable to include both the --partition and --gres (and any other flags) of your liking. Take a look here to see rules for usage, and your options.

There is some other problem, arggg!

Well what are you waiting for? Ask for help by opening an issue! or submitting a pull request.

Wait, Why not Containers?

It occurs to me, it’s pretty annoying to need to load modules, and still have broken dependencies. Would you be interested in a function like this to start an interactive container? And then allow it to select any container of your choosing? While this isn’t a container cluster proper, this is likely not too hard to do! Please let me know (@vsoch on Github) or Twitter) if this would be of interest to you, and consider it done!

Do you have questions or want to see another tutorial? Please reach out!